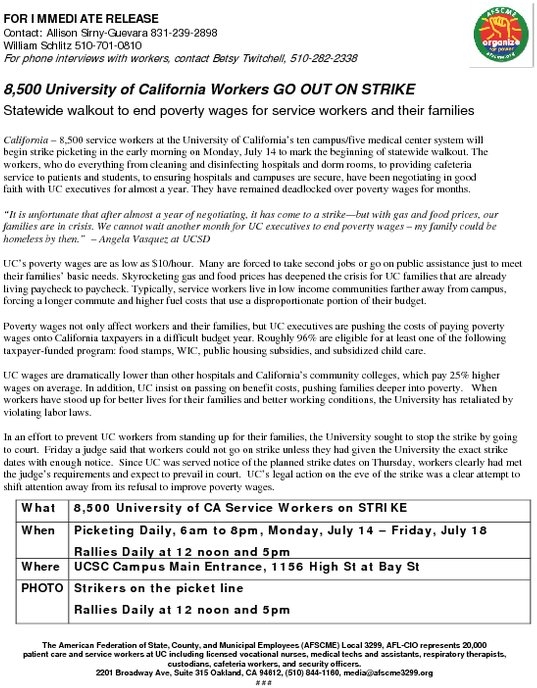 8,500 University of California Workers GO OUT ON STRIKE

California – 8,500 service workers at the University of California’s ten campus/five medical center system will begin strike picketing in the early morning on Monday, July 14 to mark the beginning of statewide walkout. The workers, who do everything from cleaning and disinfecting hospitals and dorm rooms, to providing cafeteria service to patients and students, to ensuring hospitals and campuses are secure, have been negotiating in good faith with UC executives for almost a year. They have remained deadlocked over poverty wages for months.

"It is unfortunate that after almost a year of negotiating, it has come to a strike—but with gas and food prices, our families are in crisis. We cannot wait another month for UC executives to end poverty wages – my family could be homeless by then." – Angela Vasquez at UCSD

UC’s poverty wages are as low as $10/hour. Many are forced to take second jobs or go on public assistance just to meet their families’ basic needs. Skyrocketing gas and food prices has deepened the crisis for UC families that are already living paycheck to paycheck. Typically, service workers live in low income communities farther away from campus, forcing a longer commute and higher fuel costs that use a disproportionate portion of their budget.

Poverty wages not only affect workers and their families, but UC executives are pushing the costs of paying poverty wages onto California taxpayers in a difficult budget year. Roughly 96% are eligible for at least one of the following taxpayer-funded program: food stamps, WIC, public housing subsidies, and subsidized child care.

UC wages are dramatically lower than other hospitals and California’s community colleges, which pay 25% higher wages on average. In addition, UC insist on passing on benefit costs, pushing families deeper into poverty. When workers have stood up for better lives for their families and better working conditions, the University has retaliated by violating labor laws.

In an effort to prevent UC workers from standing up for their families, the University sought to stop the strike by going to court. Friday a judge said that workers could not go on strike unless they had given the University the exact strike dates with enough notice. Since UC was served notice of the planned strike dates on Thursday, workers clearly had met the judge’s requirements and expect to prevail in court. UC’s legal action on the eve of the strike was a clear attempt to shift attention away from its refusal to improve poverty wages.

UCSD Campus, Gilman Parking Structure, Villa La Jolla & Gilman Dr.
Add Your Comments
LATEST COMMENTS ABOUT THIS ARTICLE
Listed below are the latest comments about this post.
These comments are submitted anonymously by website visitors.