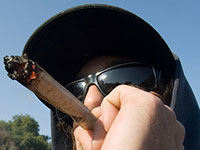 Thousands of students from around the Monterey and San Francisco Bay Areas participated in a "Four Twenty" celebration in Porter Meadow at UC Santa Cruz on April 20th, 2008. Four Twenty (420) is a time of day when people, often a group of friends, smoke cannabis together or eat foods cooked with it. For that reason, April 20th has evolved into a counterculture holiday where people gather to celebrate and consume cannabis. Porter Meadow at UCSC has traditionally been the largest 420 gathering place around, and this year was said to be even larger than 2007. Despite the severe measures initiated by the UCSC administration to curtail the unorganized convergence, folks showed they were determined to experience Four Twenty as one large group of people in the Porter Meadow.