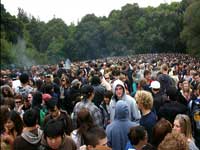 Every year on April 20, folks gather around North America to celebrate and smoke. UC Santa Cruz has historically had one of the largest gatherings around, a self-fulfilling prophesy of sorts, spurred on by UCSC's unique cultural history and the occassional spotlights from outside (like Rolling Stone Magazine a few years ago). It's a big community event - a place where thousands of people can bring a bunch of friends, musical instruments, frisbees, you name it, and just have fun. It's in a safe and relatively secluded location (Porter Meadow) and problems are rare.

Measure K, passed by 64% of Santa Cruz voters in the November 2006 elections, makes enforcement of state and federal laws pertaining to the distribution, sale, cultivation or use of marijuana by adults their lowest law enforcement priority. Even though students vote in City elections, the University of California is exempt from local measures.