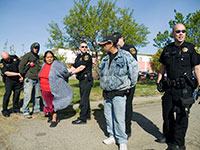 On March 31st at 9:45 am, the Yolo County Sheriff's Department raided D-Q University, California's only Tribal college. 18 elders, students and community supporters were arrested after police stormed onto campus with guns drawn. In a similar incident on February 20th, Sheriff's deputies came onto the sovereign campus and arrested three Native students. Their court date will be on Wednesday, April 2nd at 7:30 am at the Woodland Courthouse. Supporters are asked to contact the CA Office of the Attorney General Jerry Brown in defense of the students and to denounce the abuse of power by the Board of Trustees and police. A comment on the newswire reports that two more students were arrested at the sacred sweat lodge grounds on campus bringing the total number of arrests to twenty since the March 31st raid.

D-Q U was born of struggle in the 70's when people occupied an abandoned Army facility and retained it for the purpose of providing traditional and formal education for Indigenous people. The Board of Trustees who legally preside over D-Q U have become corrupt, betraying the true purpose of the university and abusing their power. In 2005, D-Q U lost its accreditation and the board demanded the school be shut down. Students who condemn the board's negligence have been holding classes themselves and have taken up residence on campus. They are dedicated to protecting D-Q U for the benefit of future generations and the education of all Native people.