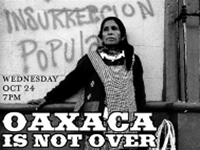 On, October 24th, a benefit was held at Station 40 in San Francisco at 7pm to support the continuing resistance in Oaxaca, Mexico. The newly released documentary "Un Poquito de Tanta Verdad" (A Little Bit of So Much Truth) was screened, accompanied by dinner and refreshments. The proceeds of the evening went to Colectivo Mujer Nueva (Oaxaca autonomous women collective) and VOCAL (Oaxacan Voices Constructing Freedom and Autonomy), an anarchist radio project in Oaxaca. Event Announcement

Un Poquito De Tanta Verdad, the new documentary by Corrugated Films in collaboration with Mal De Ojo TV, has been described by Emir Sader, of the Latin American Council on Social Sciences, as "Powerful...impressive. An essential testimony. Without a doubt, A Little Bit of So Much Truth will leave it's mark on contemporary, independent documentary filmmaking."

During the 6-month active rebellion, Indybay provided coverage of the events thanks to volunteers on the ground. Indybay's Past Coverage on the Oaxaca Insurrection included (but was not limited to): The August Elections | The Attack on the Popular Guelaguetza | Coverage from the month of November when the Federal Police entered Oaxaca City