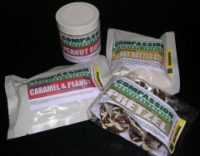 On September 26th, the DEA extended its practice of raiding medical cannabis dispensaries and cannabis grow operations to conducting raids in Oakland on a supplier of edible medicinal products. The DEA raided five locations that it claimed were connected to Tainted, Inc., which is a supplier of medical cannabis "edibles" that can be found in dozens of medical marijuana dispensaries in California. Heavily armed federal agents seized cannabis plants and medicinal edibles, arrested three people and killed an employee’s dog. Another dog was reportedly hit by a car when it ran into the street because a door had been left open.

“Raids on people who help patients are increasing across California because the DEA realizes they are at the end of a losing battle,” said Steph Sherer, executive director of Americans for Safe Access, a national medical cannabis advocacy organization that is based in Oakland. Tainted, Inc. provides clearly labeled baked goods and other marijuana edibles to medical cannabis patients and collectives all over California. Edible cannabis products provide an alternative to smoking cannabis and are preferred by many patients. The products made by Tainted, Inc. are available only through medical cannabis dispensaries and carry prominent warning labels.

The development of delivery methods that do not involve smoking was one of the recommendations of the White House-commissioned 1999 Institute of Medicine Report on medical marijuana. While long term studies of chronic marijuana users have shown that there is no associated risk of lung cancer or other diseases, many patients remain concerned about smoking cannabis or find oral ingestion to be easier or more effective. More than one hundred of California’s medical cannabis dispensaries provide edibles to their patients. Tainted owner Michael Martin was out of town when the raids occurred and is expected to turn himself in to federal agents next week. Because federal law does not recognize medical uses for marijuana, if he goes to trial, Martin will not be allowed to tell jurors that his company supplied medical cannabis products through licensed dispensaries to qualified patients..