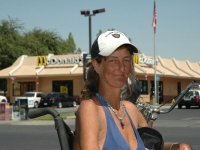 Sherri Williams was cited by the police yesterday because she tried to use the restroom at McDonald's at Olive and highway 99 in Fresno. Williams and her husband Al are regular customer at McDonald's, they're homeless and she uses a wheelchair. On that morning, Al bought a cup of coffee and Sherri headed to the restroom. That is when McDonald's manager Michelle Torres saw Sherri and said "I need you to go, your not purchasing anything, I need you to go." Al told Torres that Sherri needed to use the restroom and wash her hands and after that she would buy something. Torres went to summons a police officer who was in the restaurant.

Moments later the officer arrived and said "they tell me they are asking you to leave but you aren't leaving." Al said "why do we have to leave?" The officer replied that "this is a private restaurant and they can refuse service to anybody." Al pointed out that they can only refuse service if they have a reason. The officer responded by saying that if she does not leave "she is going to be arrested."

Sherri was then taken outside and given a citation - PC 602.1 for "Interfering with Business" by officer D.J. Onruh that demands she show up in criminal court on September 5.