Add an Event
Newswire
Calendar
Features
Home
Donate
From the Open-Publishing Calendar
From the Open-Publishing Newswire
Indybay Feature
Related Categories: Central Valley | Health, Housing & Public Services
Homeless Woman Arrested at McDonald’s
by Mike Rhodes (mikerhodes [at] comcast.net)
Sunday Jul 8th, 2007 1:07 PM
A homeless woman in a wheelchair was arrested and given a citation because she needed to use a bathroom. 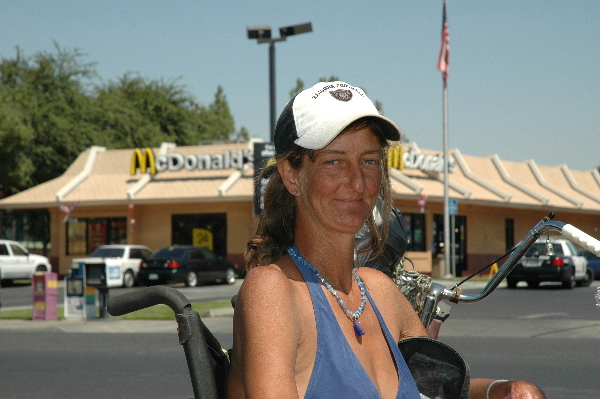 Sherri Williams was cited by the police yesterday because she tried to use the restroom at McDonald’s at Olive and highway 99 in Fresno. Williams and her husband Al are regular customer at McDonald’s, they’re homeless and she uses a wheelchair. On that morning, Al bought a cup of coffee and Sherri headed to the restroom. That is when McDonald’s manager Michelle Torres saw Sherri and said “I need you to go, your not purchasing anything, I need you to go.” Al told Torres that Sherri needed to use the restroom and wash her hands and after that she would buy something. Torres went to summons a police officer who was in the restaurant.

Moments later the officer arrived and said “they tell me they are asking you to leave but you aren’t leaving.” Al said “why do we have to leave?” The officer replied that “this is a private restaurant and they can refuse service to anybody.” Al pointed out that they can only refuse service if they have a reason. The officer responded by saying that if she does not leave “she is going to be arrested.”

Sherri was then taken outside and given a citation - PC 602.1 for “Interfering with Business” by officer D.J. Onruh that demands she show up in criminal court on September 5. Sherri and Al believe that they are being discriminated against because they are homeless and Sherri is in a wheelchair. In a letter Sherri sent to McDonald’s on June 29, 2007, she wrote about an incident that happened three days earlier. In that incident, Sherri wrote “I was subject to harassment and false accusations by employees of the establishment for use of a public restroom. As a patron at this restaurant there was no legal cause or justification to be escorted out of McDonalds by a Fresno City Police Officer.”

Sherri admits that she might take longer in the restroom than other customers because of her disability. In her letter of June 29, Sherri wrote “I have been a regular patron of this location for several years and never have had regular customers make complaints about my use of the restroom nor harassed by Mc Donald staff as I have in recent months by current management. I am not certain if it’s my homelessness or disability but it seems that my presence annoys these employees regardless of the fact that I have patronized McDonalds for years. I may have left a slight mess when using the restroom but it is partly because of my health, limited condition and the inadequate dispenser in the women’s restroom. I am not clear who sets the policies, practices and procedures at this establishment but it certainly violations the Americans with Disabilities Act as it relates to accommodating an individual with a disability and the inadequate dispenser in the restroom.”

Waiting in the parking lot, while the officer wrote up the citation for her crime of needing to use the bathroom, Sherri was getting hot as temperatures climbed to over 100 degrees. The officer was sitting in his air conditioned cruiser as he wrote up the citation. It was at this time when my daughter and filmmaker Simone Whalen-Rhodes arrived on the scene with her video camera. As she filmed the developing scene McDonald’s manager Torres came out and said “I’m going to have to ask you to leave, you can not video on our property.” Simone responded that she has a legal right to be there and Torres said “you don’t have a right to be on my property and video tape, so I’m going to have to ask you to leave.” The intrepid journalist stood her ground and refused to leave.

That was when I arrived, hearing Torres say “sir, you are not allowed to take pictures. . . and I’m asking you to leave.” I replied that just because Torres didn’t want me there does not revoke my rights as a journalist. There was a story unfolding and I was determined to find out what was happening. She claimed McDonald’s had a rule about photography on their property and I continued to insist on my right as a journalist to cover the story. Torres eventually went inside and the issue was dropped.

The police were now aware that this incident was being documented and decided not to arrest and book Sherri. As one officer stood in the shade and another sat in his air conditioned car, Sherri continued to bake in the hot sun. Soon, a Sargent and more officers arrived. The Sargent asked for my identification and informed me that I could keep my photos and the video. This generous gesture (allowing me to keep my photos and video) was tempered with a threat that they might get a court order to use them in a criminal proceeding should this incident end up in court.

Officer Onruh emerged from his cruiser to issue the citation. He told Sherri he was issuing the citation because she was “trespassing and interfering with the business and Michelle is the store manager, she is the one who arrested you.” Sherri was finger printed and signed the citation.

Earlier in the morning, and the reason why an officer was in McDonald’s in the first place, was that there had been a robbery. One officer responded to the robbery call. On the other hand, there were at least three police cruisers on the scene and six or seven officers involved to sort out the alleged crime of a homeless woman needing to use the bathroom. What is wrong with this picture? 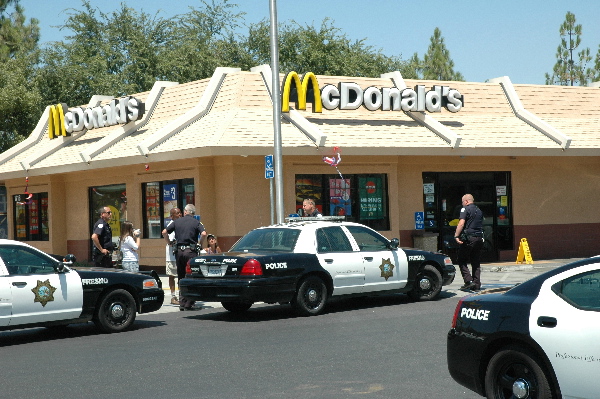 There were at least three police cruisers on the scene and six or seven officers involved to sort out the alleged crime of a homeless woman needing to use the bathroom.
http://www.fresnoalliance.com/home/homeles...
§McDonald’s Manager Threatens Journalists
by Mike Rhodes
Sunday Jul 8th, 2007 1:07 PM 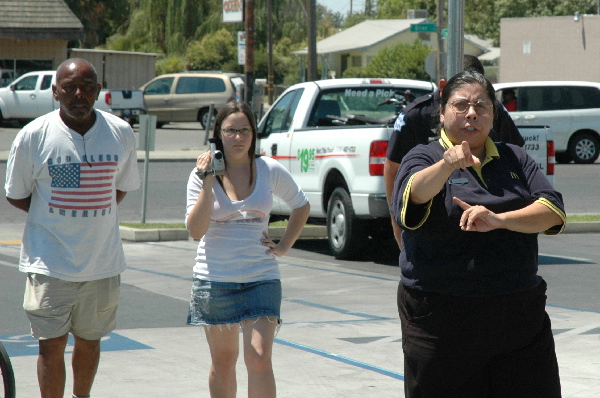 She claimed McDonald’s had a rule about photography on their property. I continued to insist on my right as a journalist to cover the story. Torres eventually went inside and the issue was dropped. 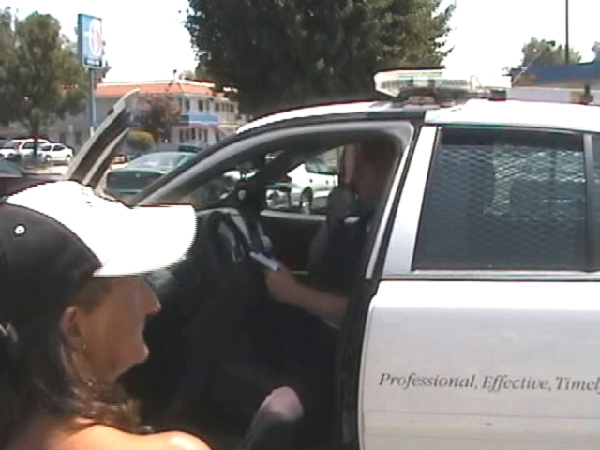 The arresting officer is seen here calling for back up. He insisted that Sherri sit in the hot sun while he conducted his business from inside his air conditioned cruiser. 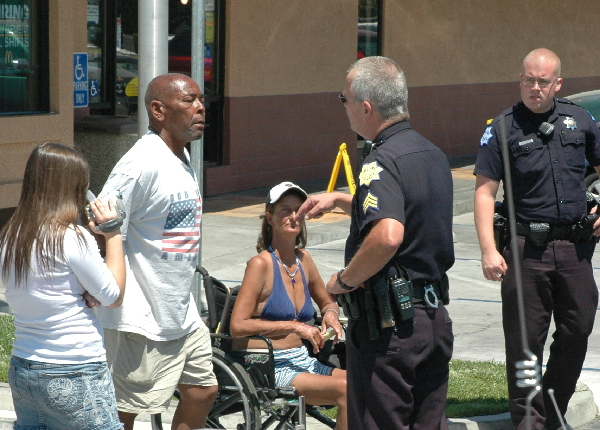 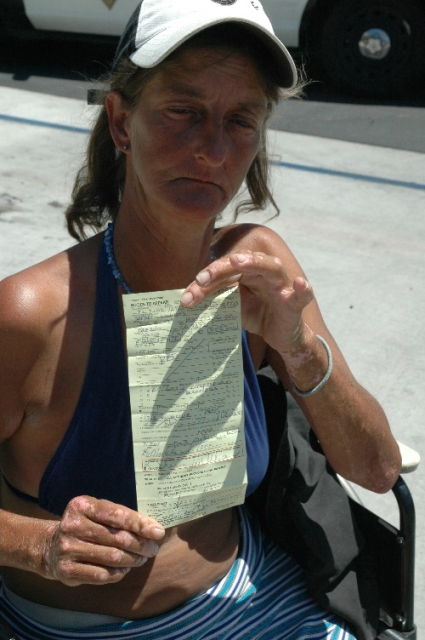 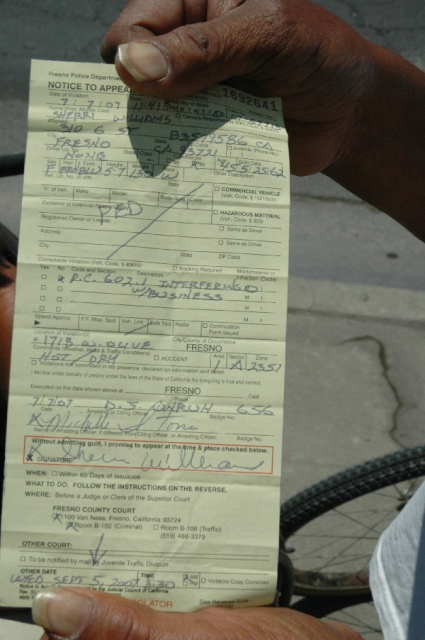 original image (600x902)
All photos (except photo 4) by Mike Rhodes. Photo 4 is from video taken by Simone Whalen-Rhodes
http://www.fresnoalliance.com/home/homeles...
Add Your Comments
LATEST COMMENTS ABOUT THIS ARTICLE
Listed below are the latest comments about this post.
These comments are submitted anonymously by website visitors.