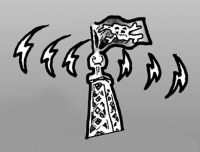 On February 15, 2007, three years after its demise, San Francisco Liberation Radio’s (SFLR) case against the Federal Communications Commission (FCC) finally reached the Ninth Circuit Court. This was the station’s third appearance in court, and it unfortunately reached the same conclusion as the previous two: a decision overwhelmingly in favor of the FCC. A victory would have done nothing in regard to the station’s ability to broadcast, but would have made it more difficult for the FCC to raid and shut down unlicensed microradio stations.

With so few options for the public to make its voice heard through the media, many see unlicensed broadcasting as an act of civil disobedience. A look at the FCC’s role in radio raises many questions and contradictions. Read More