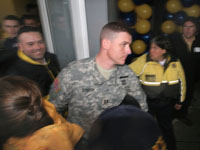 With hundreds of students expected to protest, U.S. Army and U.S. Marine Corps recruiters announced on April 17th their withdrawal from the Last Chance Job Fair being held at UC Santa Cruz on April 24th. Student protests have made UCSC an increasingly ineffective site of military recruitment for almost three years.

On Tuesday, April 24th, Students Against War (SAW) will be hosting a rally at Baytree Plaza beginning at 10 am in celebration of this victory. Joined by members of Iraq Vets Against the War (IVAW), the rally and subsequent actions will demonstrate the student body’s continued opposition to war and will further the campaign to untangle the University of California from military-related research, nuclear weapons production, and the other aspects of what might be termed ‘the war machine.’

As the military loses more troops overseas and our generation refuses to take their place, UCSC’s success can be seen as a model for how communities can directly resist war without relying on the corrupt political process. Although the law prevents schools from banning recruiters outright, UCSC students, through massive protests, have effectively prevented recruiters from operating on campus for nearly three years.

“We’ve upheld our community’s values of tolerance and nonviolence despite federal attempts to impose militarism on our daily lives,” said third year student Natalie MacIntyre. “If every school prevented recruitment, if every port stopped shipping weapons, if every community refused to accept war profiteers as neighbors, war would be impossible.” Read More