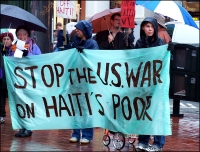 February 7, 2007: International Day in Solidarity with the People of Haiti
45 Cities Around the World Plan Actions to Say, "UN Out of Haiti!"

February 7th was an International Day in Solidarity with the People of Haiti. The day was part of a campaign against the US/UN Occupation by the popular movement in Haiti, leading up to February 15th, when the UN Security Council is due to renew its Haiti mandate. The 8000 UN troops are seen as a proxy force for the US, French and Canadian soldiers who overthrew Haiti's government in a 2004 coup. UN troops and police-controlled death squads routinely assault communities that support the Lavalas grassroots democracy movement. Organizers say, "We need to act now in solidarity with our Haitian sisters and brothers, whose unbreakable spirit, in the face of severe repression, just won’t stop." International demonstrations have been held in the past, with actions in over 15 cities on July 21st, 2005, and in 47 cities in 17 countries on September 30th, 2005.

Today, violent repression continues against grassroots activists and communities – by UN forces and paramilitary death squads created by the Haitian National Police. In addition to killings, this repression has taken the form of sexual abuse, beatings, house burnings, arbitrary arrests, and the prolonged, illegal detention of people without any charges. UN forces have been repeatedly implicated in these activities. In San Francisco, people gathered at 4:30pm for a rally at Powell and Market Street, followed by a march to the Brazilian Consulate. Brazil commands the UN military force in Haiti.

Audio
In San Jose, people gathered from 5pm to 6pm at the South end of Cesar Chavez Plaza.