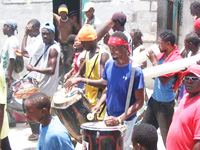 September 30th was the anniversary of the first US-sponsored coup that ousted President Aristide in 1991. An international day of action had been called for September 30th by the Fondasyon Trant Septanm (September Thirtieth Foundation). People were encouraged to have a demonstration on the 30th to denounce the dictatorship and US/UN repression in Haiti, and call for an International Coalition to work for the return of democracy in Haiti, the return of the President, and the establishment a fund, administered by the September 30th Foundation, to support victims of repression in Haiti.

Demonstrations took place in two Bay Area cities on the 30th: a morning rally and picket in San Francisco at the Federal Building, and two protests in San Jose, the first a lunchtime protest at the French Consulate and the second at the Federal Building. Protests were scheduled for over 30 other cities around the world including Dublin, Ireland. In Haiti, demonstrations were not allowed to go forward.