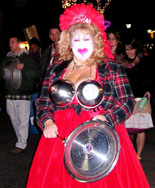 Last year, the celebration erupted into the national headlines when it was discovered that Santa Cruz Police had violated the civil liberties of organizers by spying on their meetings for three months, gathering information about the group and engaging in other activities unrelated to the stated purpose of their investigation.