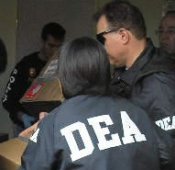 At a hearing on Tuesday morning, October 17th, a judge will determine whether Sparky Rose, the executive director of New Remedies, can post bail or not. His attorneys are asking for friends, business associates,and members of the community to be present in the courtroom during the hearing. Read more

On Tuesday, October 3rd, the Bay Area medical marijuana community was rocked by the news that eight Bay Area locations had been raided by federal agents. The targets were allegedly associated with growing, prescribing, and dispensing medical marijuana, according to the U.S. attorney's office. Drug enforcement agents and federal police say that they seized 12,743 plants, more than $125,000 in cash, cars, computers, and marijuana from some five places in San Francisco and three in Oakland, all of which were associated with New Remedies Cooperative and Potent Employment Solutions. New Remedies was the only surviving spinoff of Compassionate Caregivers, which has been under investigation ever since their LA outlet was busted in May, 2005. Sparky Rose, the executive director of the organizations, was one of over a dozen people who were arrested. They were expected to be arraigned on Wednesday. A march was held from City Hall to the Federal Building.

Some say that New Remedies was a "victim of its own success," as it had become too large not to attract adverse attention from the feds. In spite of the news that so many facilities were raided, it does not appear to have been part of a larger sweep this week by the DEA. However, DEA agents in a white Dodge van were recently seen photographing a dispensary in San FRancisco. Read more