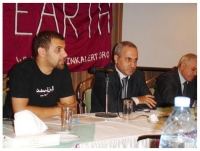 JetBlue Bans Arabic T-Shirt From Airplane
Racism At The Airport

On August 12th, Iraqi blogger Raed Jarrar was told by airline Jet Blue that he could not board an airline with a t-shirt saying "we will not be silent" in Arabic and English. One official told him, "Going to an airport with a T-shirt in Arabic script is like going to a bank and wearing a T-shirt that says, `I'm a robber'". A Jet Blue employee told him "we can't let you get on that airplane with your t-shirt". Raed responded, "I am ready to put on another t-shirt if you tell me what is the law that requires such a thing. I want to talk to your supervisor". The official responded "You don't have to talk to anyone. Many people called and complained about your t-shirt. Jetblue customers were calling before you reached the checkpoint, and costumers called when you were waiting here in the boarding area".
Read More | Movement Grows to Challenge Racial Profiling at Airports | Iraqi Peace Activist Forced to Change T-Shirt | BBC | UK Guardian

On Raed's blog he writes that when he recently visted Lebanon and Syria with an American peace delegation, one "thing you can't miss in Jordan and Syria is people's anger against the US... The most interesting incident was during a visit to a Lebanese refugee camp. I was called by two young Lebanese people, and they asked me whether me and the rest of the delegation visiting their shelter where coming from the US. I said yes. They said: "you better get the hell out of here unless you want us to make a scene". I tried to explain that we are the "good" Americans who are against the war, so they said go back home and change your government. "you can't come here visit us in a shelter that we were sent to because of your tax money and your bombs, and expect us to be nice to you". So me and the other Americans got the hell out of there." Read More

Raed Jarrar is currently living in the Bay Area and is the Iraq Project Director for Global Exchange. Before the US invasion of Iraq, Raed lived in Iraq and ocasionally wrote on Salam Pax's blog which was turned into the book "The Clandestine Diary of an Ordinary Iraqi" After the US invasion, Raed started his own blog Raed In The Middle and much of his immediate family also wrote about their experiences. Raed's mother Faiza's blog is A Family In Baghdad, his brother Majed's blog is Me vs Myself and his brother Khalid's blogs is Tell Me a Secret.