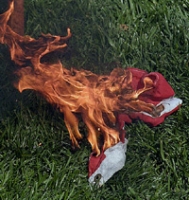 On the Fourth of July, patriotic Americans everywhere celebrate Independence Day with fireworks, cookouts, and time with their families. This year, some celebrations will be interrupted by reminders that the United States does not give freedom to everyone. Anarchists and other radicals celebrate the 4th, but one activity that they enjoy was nearly made illegal this summer: burning the American flag. An amendment backed by the Bush administration to give Congress the power to “ban desecration of the American flag” received 66 votes with 34 against, just missing the two-thirds margin required for passage. Read more Local Representatives Tom Lantos of San Mateo and Richard Pombo of Tracy had voted in favor of the amendment.

Many people were relieved at the amendment's failure, pointing out that criminalizing flag desecration would have been a way of taking away people's First Amendment Rights. Others point out that "the flag flies at Abu Ghraib and Guantanamo, and many other prisons run by U.S. forces where prisoners are denied fundamental legal rights and are tortured and killed." The increase in Bush-led "rallying around the flag" since 9/11 has been compared to the use of the swastika in the rise of the Fourth Reich in Germany. Several community organizations and anti-war groups had contingents in the independence day parade in Bolinas.

Photos A post to Indybay called for a flag burning/solidarity celebration to be organized. Flag burnings have traditionally taken place at People's Park at around 2pm, as well (American flags are not the only ones burned at these events).

On Tuesday, July 4th, the SF Mime Troupe held its annual season premiere in Dolores Park in San Francisco. "Godfellas" began at approximately 1:30pm. Act Against Torture performed street theater at July 4th celebrations in San Francisco and the East Bay. Some people dressed in costume as detainees, while others will hand out literature and orange ribbons, and collected pledges for the Declaration of Peace, a pledge to participate in non-violent action to end the US war in Iraq.