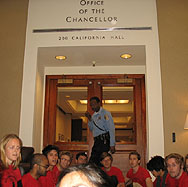 On April 11th, a crowd of 200 gathered at UCB to support a" sweat-free UC". Condeming the University's use of sweat shop labor in the production of collegiate apparel, and promoting United Students Against Sweatshops' designated supplier program, students staged a "Naked Truth" rally and sit in that resulted in 18 arrests and more verbal volley from University administration

Students were disturbed that their legal observer, a member of the National Lawyer's Guild, was removed by police at the beginning of the sit in while the University's legal advisor was allowed to stay on for the duration of the event. The sit in ended in 18 arrests for "trespassing and refusing to leave" after aproximately 2 and a half hours of proposals and demands.
Read More | Photos | USAS action alert | United Students Against Sweatshops