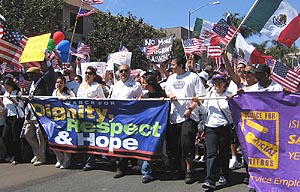 On April 9th and 10th 2006, immigrants and their allies gathered in cities across the US to oppose the harsh and unworkable House Resolution 4437, and call for the full enfranchisement of all immigrant workers. These protest built on several weeks of mass protest on this issue in what amounts to the largest display of decentralized, coordinated protest in US history. On Thursday, proposed compromise legislation stalled in the Senate. Protesters say they seek real immigration reform that is comprehensive, respects civil rights, reunites families, protects workers, and offers a path to citizenship for the current undocumented and future immigrants to the US.

See US Indymedia's April 10th Page for an archive of related Indymedia coverage and background links.