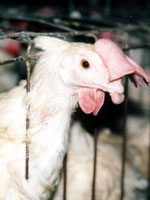 Ninety-five percent of all eggs in this country are produced by hens in cramped and unhealthy battery cages which are packed into dark and rank warehouses holding up to 125,000 birds each. A significant share of the nation's eggs come from California's Central Valley. Animal advocates are addressing this intensive industry-standard practice in a number of ways and achieving some success. Activists campaigned recently to urge the Trader Joe's grocery chain to stop selling eggs from battery caged hens. As of February 1st, the grocery store no longer carries such eggs. East Bay Animal Advocates (EBAA) has released a video documenting the squalid condition of egg-laying hens in California. EBAA are encouraging people to see for themselves where their eggs come from and to contact their elected representatives to demand enforcement of a law which makes the conditions created for hens by battery cage confinement illegal. The Humane Society of the United States (HSUS) has filed a lawsuit targeting the tax-breaks that egg producers receive despite the legal violations inherent in their methods.