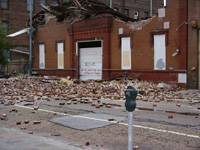 Thursday, September 1st: In the wake of Hurricane Katrina, many thousands of people in Louisiana, Mississippi, and Alabama have found themselves variously homeless, stranded on roofs, or in shelters many miles from what they used to call "home." In advance of the storm, many people drove out of cities such as New Orleans, but the poor and people who did not have relatives in other areas were left behind to face Katrina.

Corporate media has given a lot of attention to looting and prison riots. Thousands of people may be dead, but rescue workers have been forced to ignore them and the potential for the spread of disease as they attempt to save people who are still alive. Many are still unable to leave their homes because of flooded streets. After a major levee break, flooding in the city worsened, and the mayor said that he was evacuating the remaining residents on Wednesday. That day, it was announced that over 20,000 people would be evacuated from the Superdome in New Orleans and moved along with some 5000 additional people to Houston's Astrodome in a caravan of 475 buses, but by Thursday night, the Astrodome was full and thousands remained in the Superdome and surrounding areas. Oil production in the region stopped as Katrina approached. One port in Louisiana that is a staging area for workers who staff gulf oil and natural-gas production platforms was set to open Wednesday after damage was cleared. Experts expect that gas prices will rise up to $4 per gallon in spite of Bush's decision to tap the country's Strategic Petroleum Reserve.

Those who are monitoring the situation and have access to telephones, electricity, and the internet are concerned with many aspects of the emergency operations in the South East. The National Guard has been limited in its ability to respond to this disaster, as many states' forces are in Iraq. As Norman Solomon said, "The catastrophic hurricane was an act of God. But the U.S. war effort in Iraq is a continuing act of the president." Thus far, Bush has made no statement committing the federal government to a significant or sustained effort to aid the areas that have been devastated by the hurricane. The American Red Cross, which is one of the country's largest relief organizations, has said that it plans to raise $135 million to provide hurricane relief, but this figure will pale in comparison to the billions that will be needed. Louisiana Governor Kathleen Blanco has said that she would order National Guardsmen to be redeployed to stop looters as soon as federal emergency personnel were on scene to take over evacuations and rescues.