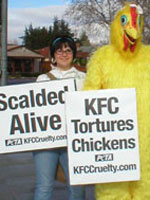 Nationwide, activists are demonstrating at individual KFC restaurants to pressure the company to adhere to comprehensive guidelines developed by its own animal welfare panelists which thus far KFC has refused to implement. In San Jose, animal rights activists numbers protesting KFC's treatment of chickens continue to grow, due mainly to "increased cross-posting on several websites and helpful email blasts from Peta", says a report from the activists. Organizers report that that the location in San Jose is their "favorite because this location's store manager always stresses out and calls the police on us - meaning that we are REALLY getting to them!" The lastest protest was no exception, as about halfway through the protest a police cruiser showed up and the officer spoke to a few in the group, then remained to watch the duration of the protest. The group handed out leaflets regarding KFC's treatment of the almost 800,000,000 chickens it processes every year, they did street theater, and the activists received a large number of supportive honks from drivers-by.