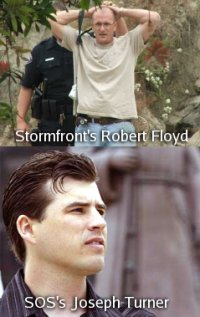 From the newswire:
When three men allegedly tried to assault Naui Huitzilopochtli, a counterdemonstrator at the Saturday, July 16, 2005 rally against the day laborer center in Laguna Beach, California, they probably didn't realize the political earthquake they were about to set into motion. For many months now, rumors had been floating around the internet among progressive activists that there was some kind of a bizarre relationship beginning to emerge between Save Our State (SOS) members, Neo-Nazi Skinheads, and White Supremacists.
Cryptic postings on the Stormfront White Nationalist Community website, a nationwide bulletin board run by an ex-Ku Klux Klan leader, hinted that something was up. Thread after thread of messages suggested that racists of all stripes across Southern California were trying to hook up with SOS. Despite the enormous amount of message traffic being generated by these persons unknown on the Stormfront and SOS websites, progressive activists just couldn't figure out exactly what was going on, but what happened in Laguna Beach on July 16th has changed everything. The very moment those three men set foot off the sidewalk, they opened themselves up to an intense amount of scrutiny. The cameras began clicking, reporters started scribbling, and policemen began investigating.
Read More With Photos: 1 | 2 | 3 | 4

Joseph Turner founded the Save Our State (SOS) group, naming it after the 1994 Prop 187 initiative which sought to deny public services to undocumented immigrants. SOS has strong ties to the Minutemen and other anti-immigrant hate groups. On May 14th 2005, Save Our State organized a protest in opposition to an installation artwork at the Baldwin Park Metrolink Station near Los Angeles, claiming the piece was pro-illegal immigration; many counterdemonstrators showed up to protest the growing racism in California
Reports From Baldwin Park: 1 | 2 | 3 | 4 | Racist network of right wingers

SOS is not the same group as SFSOS which was a group that helped Newsom get elected and has support from Feinstein and many other leaders of the state Democratic Party. SFSOS is run by political consultant Wade Randlett and partly financed by Gap Chairman Don Fisher. While SFSOS presents itself as a moderate organization, it has worked to undermine San Francisco's school desegregation program and used anti-immigrant rhetoric when it campained to defeat San Francisco's Prop F in 2004. SFSOS and SOS may or may not be linked, but aside from similar names they also seem to hold some views in common.