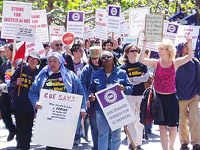 In the last two years, the Coalition of University Employees (CUE) has attempted to win modest pay raises for clerical workers, and the university has steadfastly refused to grant them. The contract that was being negotiated two years ago still has not been settled. A state-appointed arbitrator has ruled the UC can afford to pay increases for clerical workers. CUE workers say, "Please join us in this 100% legal strike to tell the administration what you think of clerical salaries at UC." Read more

Workers have been out on picket lines in San Francisco, Oakland, Berkeley, Davis, Santa Barbara, and San Diego since Monday in their three-day strike (Video from Monday June 13th at UCSF Medical Center). On Wednesday, June 15th, there will be a picket at Parnassus in San Francisco from 7:30am to 5:30pm, with a 12pm rally. There will also be a 12pm special Rally at the Office of the UC President in Oakland (UCOP, at 1111 Franklin Street) on Wednesday, where people will have been on the picket lines since 7:00am.