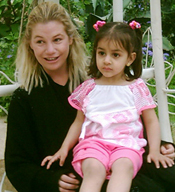 A Bay Area Memorial for Marla Ruzicka will be held on Monday, May 3rd at 7:30 PM at the Women's Building in San Francisco.

On Saturday April 16, 28-year-old Marla Ruzicka, who was originally from Lakeport, California, was killed when a car bomb exploded on a street in Baghdad. Faiz Ali Salim, her Iraqi partner, was also killed, and five people were wounded. The attack apparently occurred on the Baghdad Airport road as she traveled to visit an Iraqi child injured by a bomb, which was part of her daily work of identifying and supporting innocent victims of this war. Marla was working for CIVIC (Campaign for Innocent Victims in Conflict), a humanitarian organization that she founded. CIVIC documents cases of innocent civilians who have been hurt by war. Marla and many volunteers went door-to-door to interview families who have lost loved ones or had their property destroyed by the fighting. She would then take this information back to Washington and lobby for reparations for these families. Read more

From a statement by Global Exchange: "Marla first came to the Global Exchange office when she was still in high school in Lakeport. She had heard a talk by one of staff members about Global Exchange's work building people-to-people ties around the world—and she wanted to do something to help. She was a quick study and took to the work with a passion and energy that were inspiring to us older activists. She later chose a college (Friends World College) that allowed her to travel to many countries and learn from diverse cultures. She quickly develop "big love"—love of the human race, in all its joy, frailties and exotic permutations... One of the things we can do to honor Marla Ruzicka is to carry on her heartfelt work to build a world without hunger, war and needless suffering." A Memorial Service for Marla was held in Lakeport on Saturday, April 23rd at 11am.