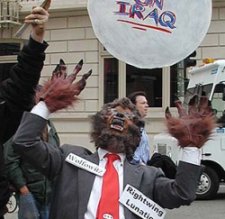 On Thursday March 31st, the board of the World Bank approved the nomination of Paul Wolfowitz as its new president.

On Wednesday March 16th, Bush nominated Paul Wolfowitz to head the World Bank. "Paul Dundes Wolfowitz, the current Deputy Secretary of Defense (and assistant to Dick Cheney, is considered to be one of the most prominent and "hawkish" (neo-conservatives). He is the principal author of the "Wolfowitz doctrine", also known as the Bush doctrine. He is a long time member of the Project for the New American Century think tank and was one of the signers of the January 26, 1998 PNAC letter sent to President Clinton. Wolfowitz has ties to Northrop Grumman. He is also on the board of the Washington Institute for Near East Policy and is a former Dean at the Paul H. Nitze School of Advanced International Studies (SAIS) at Johns Hopkins University." While NPR and the corporate media have tried to sell Wolfowitz to the public as an idealistic promoter of "Democracy and Freedom" neo-conservatism is at root a belief in US unilateralism, where no country can be allowed to stand in the way of US policies and only US lives matter. Wolfowitz's support for brutal anti-democratic tyrants extends into his past as US ambassador to Indonesia and his continued support for Suharto despite many massacres of pro-independence and pro-democracy advocates.

US nominations of heads of the World Bank have never been challenged and it is likely that while European leaders may pay lipservice to Wolfowitz's controversial stands, they have likely already approved him for the job.