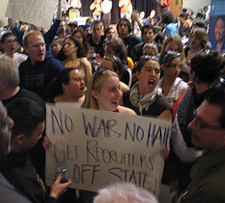 On March 9th, students at San Francisco State assembled a unified front in an effort to kick military recruiters off-campus. This 3 minute video captures the first portion of the protest. Photos | Video: 1 | 2

On Wednesday Feb. 23, about 30 anti war activists protested the inclusion of the United States Marine Corps at the UC Berkeley career fair. After a 15 minute picket and flyering outside the career fair, about 20 students went inside the career fair to take the message to the recruiters and everyone inside the career fair. For about 20 minutes students asked the recruiters about their policy barring gays from the military, and also about the morality of the war in Iraq.
Last fall, the the Third U.S. Circuit Court of Appeals stated that if a college opposes the "Don't ask, don't tell" policy barring homosexuals from serving in the armed forces, that school has a First Amendment right to protest by blocking access to military recruiters. UC Berkeley's own anti-discrimination policy forbids employers who discriminate based on sexual orientation.
Read More | Similar Protest Last Month At UC Hastings | More Recent Anti-Military Recruiting Coverage
Related Categories: Anti-War