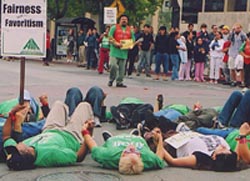 10/17/04: During UC Berkeley's homecoming football game on Saturday, a banner flew over the stadium reading, "Be fair to low-wage workers." Roughly 300 service employees from all the UC campuses rallied at UCB beginning Friday afternoon at Sproul Plaza, highlighting a report recently released by a group of Berkeley sociology graduate students. The report, called Berkeley's Betrayal, said the campus pays and treats its service workers poorly, and includes statistics of those earning less than a living wage.

It cited 66 percent of Berkeley food service workers earning less than $10.76 an hour and 100 percent of them earning less than $16.88 an hour. Among all service workers at UCB, 20 percent earn less than $10.76 an hour, and 87 percent earn less than $16.88 an hour. The starting wage for food servers at Berkeley is $9.11 per hour. The living wage for a family of four in the Bay Area is $16.88 when each parent is working, according to a recent press release from the American Federation of State, County and Municipal Employees. Though the report was done only on the Berkeley campus, UC service workers from across the state say the problem doesn't only exist at Berkeley.
Other Coverage: SF Indymedia 1 2 | Daily Cal - Service Workers Protest UC | Daily Aggie - UC Staff Union protests at Telegraph and Bancroft | Daily Planet - UC Workers Plan Protest Over Expired Contracts