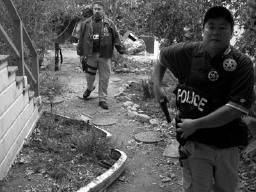 9/30/04: Press Release from FRSC
9/29/04: "Freak" Radio Santa Cruz 101.1 FM was raided this morning by some 2 dozen armed federal agents with automatic weapons and riot gear. The station was airing Democracy Now! at the time of the raid; sleeping residents were roused out of bed and forced outside by Federal Marshals; 5 FCC agents later arrived to locate the transmitter and seized all broadcast equipment, including the antenna. 50-100 residents showed up to protest the raid and one SC-IMC photographer was roughed up by Mashals. FRSC had never been raided after almost 10 years of broadcasting, and despite its frequent criticism of the city's anti-poor policies, had recently won a resolution of support by the Santa Cruz City Council. Someone slashed the tires of the FCC & Marshals vehicles, stranding them on the premises for a little longer than they'd planned.. Video Initial report | Santa Cruz Indymedia