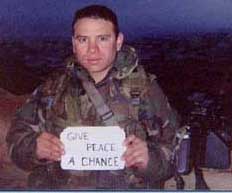 On the 21st of May, Sergeant Camilo Mejía was found guilty of desertion and sentenced to one year in prison. During the trial his lawyers were not permitted to present arguments relating to his conscientious objection, including describing the abuse he witnessed while he was in Iraq. Mejía had served three years in the Army and almost five in Florida's National Guard when he was deployed to Iraq in April 2003. In his job as an enforcer of the US war and occupation, Camilo witnessed—and sometimes even caused—many deaths, including deaths of children, political protesters, and other civilians. He went to the U.S. on what was supposed to be a two-week furlough to deal with his immigration status in October 2003 but did not report back to the military until March 2004. In mid-march, Sgt. Mejia spoke at a public rally/press conference at the Peace Abbey, near Boston, MA and then surrendered to military authorities. At that time he announced that he would apply for conscientious objector status. Amnesty International considers Camilo Mejia to be a prisoner of conscience because his application shows that he is a "genuine conscientious objector whose objection to war evolved in response to witnessing human rights violations in Iraq."
A few days after the trial Camilo Mejía was sent to Fort Sill, Oklahoma- to serve his sentence thousands of miles from his young daughter, his family, his lawyers, and the peace organizations and friends that support him. Mejía is a citizen of Costa Rica, and as such, his mother and other supporters say, the US should follow the treaty that clearly establishes that a Costa Rican citizen cannot be forced to extend his military service. The case of Camilo Mejía, who is better known as a Nicaraguan immigrant with U.S. residency, has helped to draw attention to the plight of the 37,000 other people in the US armed forces who are non-US citizens.
More about Camilo Mejía: Not in Our Name | Common Dreams | Citizen Soldier | The Peace Abbey | Petition Online | SNAFU | Some ways you can help