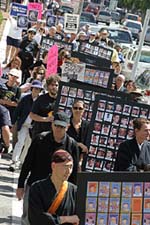 On Friday April 30th, demonstrators gathered at the foot of Market Street, and after several minutes of silent mourning for the people lost in Iraq, made their way to the San Francisco Armed Forces Recruiting Center where they proceeded to remove stacks of recruiting brochures and smiling cardboard cutouts of members of the U.S. armed forces -- throwing them into the street. Continuing through San Francisco the protesters, trailed by a small number of police officers, headed to the British Consulate were they rallied inside the atrium of the consulate building. The march then continued to the Pacific Stock Exchange, and later reconverged at Union Square. Photos: 1 | 2
On Saturday May 1st at noon, a crowd gathered at 24th and Misson in San Francisco for a "Community Speak-Out Against War & Occupation." Photos: 1
At 2 PM, dozens of people gathered at UN Plaza and then marched through downtown San Francisco. Prayers were given and names of the dead were read as the crowd passed the Federal Building, the Veterans Building and then Civic Center Plaza.
Photos: 1 | 2 | 3 | 4   Video: 1