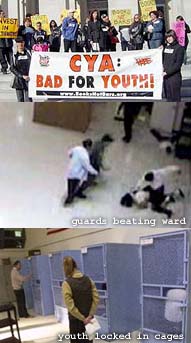 4/3/2004:The California Youth Authority (CYA) has long been known to be a disaster of violence and abuse of authority. Several recent events have created a public outcry that could force changes to this 63 year old institution.
In January, two 18 year olds were found hanged in their cells. The families of the two teenagers filed suit against the state for "denying mental health care and treatment and education to its wards." A state study then revealed that CYA "inmates are often locked in cages (Photo) as punishment, and those with mental problems are frequently drugged and improperly cared for."
As the news media focused long needed attention on the CYA, questions were raised and many counties took action. San Mateo County was the first county that announced it would stop sending children and teenagers to the CYA. On February 19th, Santa Clara County joined in and on the 23rd Santa Cruz County officially joined the ban. On February 24th, the San Francisco Board of Supervisors adopted a resolution "urging the San Francisco Trial Courts, District Attorney, Juvenile Probation Department and Public Defender not to sentence or cause to be sentenced, any person to the California Youth Authority (CYA) unless a CYA commitment is required by law". But these actions paid no more than lip service to the problem with many existing wards still stuck in the system.
By March 14th, Santa Cruz District Attorney Bob Lee was already claiming that "changes have been made at CYA facilities" and calling for new teenagers to be sent into the system. On March 17th, San Mateo County also quietly rescind its moratorium on youth referrals. On March 25, supporters of Loreto Arizpe, a youth who was scheduled to be committed to the CYA, rallied in front of the Santa Cruz County Courthouse to demand that Lee stop sending children into the CYA. Photos | Audio
Any hint that the CYA had changed was quickly contradicted by a video (realmedia | mpeg ) released by a state senator on April 1st showing an incident in January in which "one youthful inmate at a facility in Stockton is repeatedly pummeled by a correctional officer and another is kicked, after they were subdued and on the ground". Reports then came in that the CYA tried to cover up the beatings and dozens of prison employees have openly refused to cooperate in "probes of inmates who bled to death or were beaten as they lay prone on the floor".
4/8/2004: Activists and community members from Books Not Bars and Let's Get Free rallied on April 6th (video | 2) to demand that California Attorney General Bill Lockyer file criminal charges against the guards in the videotape. They are continuing a spring campaign calling for the closure of the CYA with an Alameda County town hall meeting on April 14th. So far, Lockyer and local prosecutors continue passing the responsibility for prosecuting anyone in this case and the teenagers beaten in the video have had to file civil rather than criminal suits against the guards that brutalized them.
Vigils are being planned statewide for April 28th against abuse in the CYA system and in remembrance of Durrell Feaster and Deon Whitfield.
Books Not Bars | Center on Jouvenile & Criminal Justice | Former Inmate: CYA Is No Mystery To Me