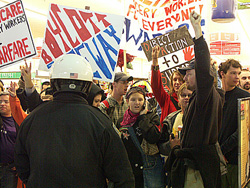 The San Francisco Labor Council called for pickets Saturday January 24th at all San Francisco Safeway Stores. Several hundred labor activists and supporters turned out for a big rally with picket lines at the entrances of the Castro Safeway from 1 to 5 P.M. About two dozen protesters went inside the store around 2pm, chanting and waving signs. Police followed them in and briefly detained several of them..
1/24 Photos: 1 | 2 | 3 | 4 | 5 | 6 | 7   Reports: 1
The next big demonstration in support of the striking workers will be on Saturday, January 31st, in Oakland.
Southern California grocery store workers have been on strike for affordable health insurance at Safeway/Pak-n-Save since October 11th, 2003 and locked out at Albertson's and Ralph's. 70,000 people went without paychecks over the holidays. Read more about the United Food and Commercial Workers.
MLK Day Actions:   1   2   | Photos from Pacific Palisades | Video From Hermosa Beach | Solidarity Rally In Portland | Previous Bay Area Safeway Actions