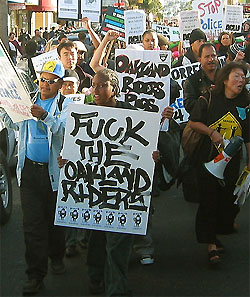 October 22nd is the annual day to remember those brutalized or killed by law enforcement. In San Francisco, people gathered at 24th and Mission, where family members of people who were killed, people who have been harassed or beaten by police, and people who do activism related to police accountability told their stories; protesters then chanted and marched to the music of Loco Bloco and the Brass Liberation Orchestra. The march ended at Civic Center Plaza, across from City Hall, where the Stolen Lives Walls were displayed. The crowd stayed for speakers, performers, and a candlelit mourning circle. Details | Read more | Anarchist/anti-authoritarian contingent
Photos: 1 2 3 4 5 6
Pictures from O22 Protest in Fresno

Since 10/22/02, police were caught on camera brutalizing young Donathan Jackson in Southern California, and were acquitted. Cau Thi Tran was murdered in her kitchen and vilified in the press, with her vegetable peeler turned into a "meat cleaver." An outrageous verdict in the Oakland Riders case gave a green light to police criminality and brutality. Just after that, Terrence Mearis was killed in his sleep by the Oakland police. In August, Jose Padua, a day laborer, was brutalized on Cesar Chavez St. in San Francisco and charged with assault with a deadly weapon -- the cast on his broken arm! Michael Pipkin's federal police brutality/civil rights case against the SFPD began on 10/21.

The Bay View/Hunters Point community will hold a march and vigil in support of police reform (Proposition H) on Saturday 11/1.