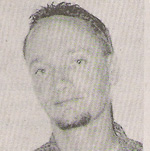 The Fresno-based activist group Peace Fresno was infiltrated by an agent working for the Fresno Sheriff’s Department. Aaron Kilner, known by Peace Fresno activists as Aaron Stokes, died in a motorcycle accident on August 30, 2003. Kilner's obituary in The Fresno Bee identified him as a member of the Fresno County Sheriff’s department and went on to say that he was “assigned to the anti-terrorist team.” Fresno activists believe that this “anti-terrorist team” is the recently formed Joint Terrorism Task Force (JTTF).

Aaron Kilner had been observed taking voluminous notes at several Peace Fresno meetings by Nicholas DeGraff, a member of the group. Other members say they saw him at peace vilgils and on the bus local anti-globalization activists took to attend the demonstration against the WTO ministerial-level conference on Agricultural Science and Technology in Sacramento in June, 2003. Read More