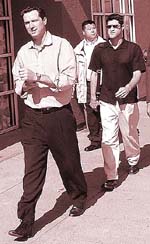 Stop Newsom! No on Prop N
October 19th, 2002 was a day of shame for San Francisco as self-proclaimed liberals lined up to support two of the most right-wing leaders SF has ever produced. An event titled SOS San Francisco, featured Feinstein spewing her anti-union and pro-war rhetoric while Gavin Newsom worked to build his own career off the lives of the least fortunate by pushing Proposition N. Newsom's Prop N would cut homeless workers wages from $350 to $59 a month and requires people to pay their rent before they can get assistance. Corporate industries such as The Gap and SF's tourism/hotel industry contributed thousands of dollars to Newsom's campaign to take poor people's money.
• Protest Prop N on Friday, 10/25 at 5:30 PM at Webster & Chestnut in the Marina District of San Francisco.
• Ten big lies of Prop N | The Prop Rap
• Cheap Wine, Rich Parents & Gavin Newsom
• Neo-Fascist Rally held in SF by Gavin Newsom
• Up-start politician Michael Sweet at fascist Newsom-Feinstein rally
• More Info: 1 | 2 | nomorehomelessness.org