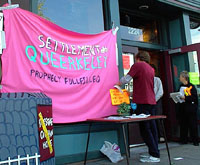 8/17/2002: About 25 queer settlers descended on a downtown Berkeley Starbucks on Saturday, August 17, claiming Berkeley as “a city without people for people without a city.” The group, organized by Queers Undermining Israeli Terrorism (QUIT!), posted a banner proclaiming the reclaimed café “Queerkeley – A Prophecy Fulfilled.”

The group selected Starbucks for the location of their first settlement in Berkeley because Starbucks founder and CEO, Howard Shultz, is a major supporter of the Israeli state and the corporation has become the prime target of an international boycott of corporations with ties to Israel. “Since Mr. Shultz clearly believes it is okay for one group of people to grab land belonging to another and say they have a right to it, we figure he won’t mind if we take some of his,” a QUIT leaflet explains.

Workers in the café were surprisingly unruffled as the Queer Defense Forces entered the café and announced over a loudspeaker that the land had been confiscated by the Queer National Fund and curfew for straights would begin in five minutes.