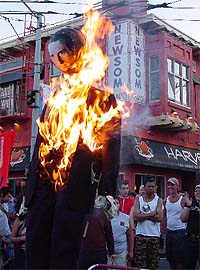 Radical queer activists brought their critique of the corporatization of the gay pride celebration into the parade Sunday afternoon. The activists peacefully joined the parade at 7th and Market Streets to carry a banner that read, “Queer mutiny - not consumer unity.” About twenty protestors marched on the parade route for less than 5 minutes. The protestors dispersed when the police asked them to return to the sidewalk. Unfortunately, six activists were arrested before they were able to leave. They were held at 850 Bryant Street without bail for several days before all charges were dropped.

Members of gay shame and other radical queers activists chose to protest the Gay Pride parade for substituting queer community building with corporate sponsorship. The pride parade ignores pressing issues facing members of the queer community, such as homelessness. When they joined the parade, the activists’ passion for justice contrasted starkly with conservative mayoral candidate Gavin Newsom’s contingent behind them. Gavin Newsom is wealthy a local wine merchant who has attacked and demonized the homeless in an effort to get himself (and his many Republican allies) into a controlling position in city government. more...