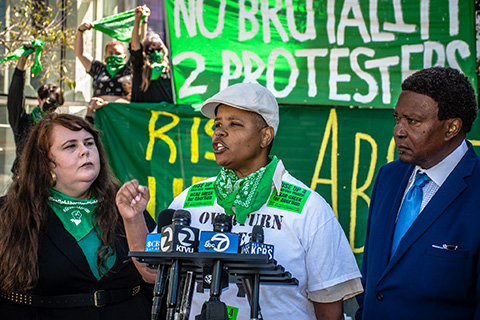 On June 13, when Kareim McKnight and another protester were at a Golden State Warriors championship game in San Francisco’s Chase Center, they attempted to display a banner defending the right to abortion, prior to the US Supreme Court overturning Roe v Wade. The banner read, "Overturn Roe? Hell No." Department of Homeland Security officers initially stopped them and San Francisco police dragged them by their feet out of the center. Despite being strapped to a gurney, handcuffed, and therefore not a danger to herself or others, McKnight was injected with a drug called Versed, also known as Midazolam, by an EMT with the San Francisco Fire Department.

On August 10, McKnight announced that she had filed a federal civil lawsuit against the city and county of San Francisco for the brutal treatment by police and for the paramedic injecting her with a sedative while she was handcuffed. John Burris, who is well known for his work in police brutality cases, is representing McKnight in her civil suit. At a press conference in front of the Chase Center attended by the plaintiff and a dozen supporters, Burris said, “Giving an injection to a protester against her will is shocking and illegal.” He explained that officials violated McKnight’s Fourth Amendment right to control her own body.

Police Brutality Against Protesters: John Burris to Announce Case Against City of SF