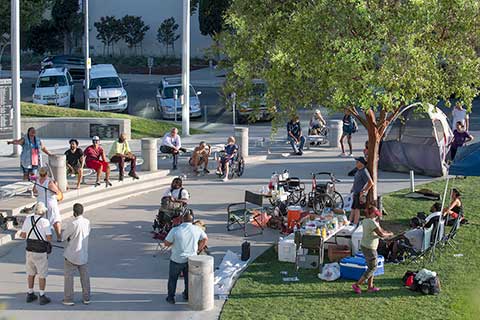 On July 20, homeless activist Dez Martinez set up a tent on the lawn in front of Fresno City Hall and invited other activists to come through. She then put out a general call for more people to come by and set up tents on July 23. On the second day, only a couple of tents went up, but around fifty supporters came. They demanded better alternatives to being on the streets.

One of the activists at City Hall was Gordie Ochinero-Bermudez, who recently got media attention for doing a 450-mile bike ride to raise money for porta-potties for Fresno’s homeless. Ochinero was herself homeless for a time, and she has had mental health issues. She thinks mental illness is common among homeless people and should be treated. In fact, she thinks this is key.

“There's a core to the problem, and it's not addiction, it's not homelessness, it's mental health,” Ochinero said. “We have to go to that core. You can put them in shelters all day long, but you're not going to be successful unless you have help there and support and resources and an AA meeting, a therapist. Somebody who can go in there and say, ‘Hey, do you take medication? Do you have a dog? Hey, let us get your dog in a shelter.’ Like do the things that are going to help them emotionally, mentally."