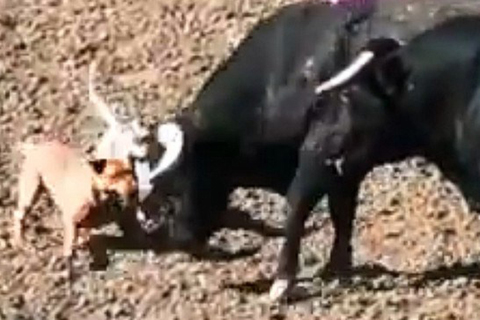 In July, dogs were pitted against bulls and forced to attack them at the California Rodeo in Salinas. As attendees were filing out of the Salinas Sports Complex, six bulls who had just been run hard by the rodeo clowns were charged repeatedly by a mixed pack of five dogs. Two of the big dogs in the group, the boerboel and the Catahoula, lunged again and again at the bulls’ faces, biting and sometimes drawing blood. A video of the attack was captured by a member of the Showing Animals Respect & Kindness (SHARK) videography team, who had been documenting the rodeo from a variety of vantage points.

Following the release of the video, outraged community members have supported an online petition calling on the rodeo to prevent a similar occurrence from happening again. "This act of barbarism is not only against the law, it is completely unacceptable animal abuse," the petition states. "We live in a violent world and this kind of behavior just desensitizes people to cruelty. It is just another step from abusing animals to abusing people and it is a step that has been proven to be connected."

"We cannot expect to live in a safe peaceful world when we encourage and allow this type of violence. Those two are on opposite ends of the spectrum."