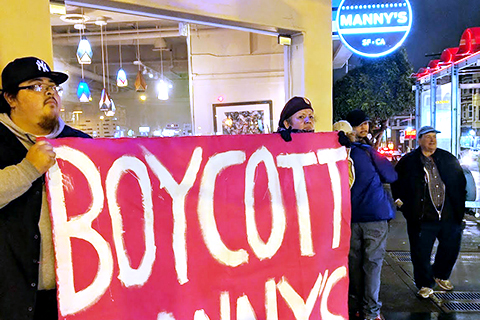 What the Boycott of Manny’s in San Francisco's Mission Is All About
Manny's Boycotted Over Gentrification, Support for Israeli Occupation of Palestine

Manny’s uncritical celebration of Israel is reflected in his Facebook post on the 70th anniversary of the Nakba (Arabic for catastrophe), the genocide and forced displacement of Palestinians that led to the establishment of the state of Israel in 1948. He wrote: “There are many reasons to celebrate [the anniversary], many of them lofty: a renaissance for Jewish civilization; the creation of a feisty liberal democracy in a despotic neighborhood; the ecological rescue of a once barren land.” This erasure of the Palestinians living on and stewarding “the barren land” echoes how U.S. settlers talked about Manifest Destiny and erased American Indians.

Protest demonstrations are held every Wednesday at 7-8pm in front of Manny's at 3092 16th St in San Francisco.