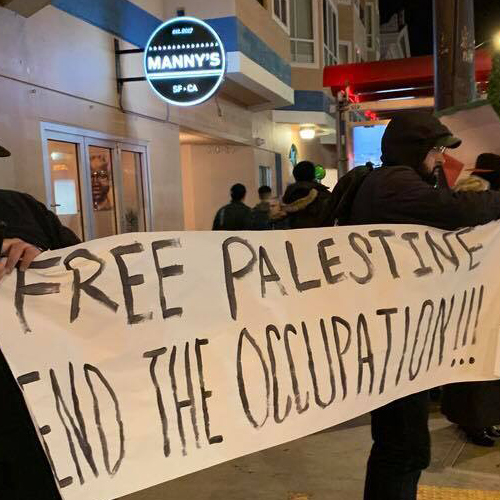 Manny’s is owned by Manny Yekutiel, who claims 1) his new business is a social justice venue, and 2) that he is a victim of anti-Semitic attacks. Manny’s is not being attacked, it’s being boycotted.

We, as Jewish and LGBTQ+ community members, are opposed both to Manny’s public support of Zionism and to its role in displacing the Mission community.

Manny’s uncritical celebration of Israel is reflected in his Facebook post on the 70th anniversary of the Nakba (Arabic for catastrophe), the genocide and forced displacement of Palestinians that led to the establishment of the state of Israel in 1948. He wrote: “There are many reasons to celebrate [the anniversary], many of them lofty: a renaissance for Jewish civilization; the creation of a feisty liberal democracy in a despotic neighborhood; the ecological rescue of a once barren land.” This erasure of the Palestinians living on and stewarding “the barren land” echoes how U.S. settlers talked about Manifest Destiny and erased American Indians.

Manny’s also reflects development plans to replace working and poor LGBTQ+ people, brown and black people, and other longtime residents of the Mission. Manny’s is yet another imposition on a community that is suffering from the opportunistic marketing of creative, progressive culture; it is the exact opposite of a community-rooted space for civic discourse about social justice issues, as Yekutiel claims.

What role does Manny’s play in mainstreaming gentrification? Yekutiel is attempting to commodify social movements to promote his establishment and his agenda to the Mission’s new residents and their friends. He is also taking advantage of some of the few resources set aside for community organizations. According to his own statements, he receives reduced rent from Mission Housing due to the “progressive” nature of his business.

Yektutiel claims that he is being attacked by the “alt-left,” a term created by Trump and right-wing media, that cynically equates the white supremacist self-described alt-right and the social justice politics of the left. The alt-right threatens the lives of people of color, immigrants, indigenous people, women and LGBTQ+ people. Social justice movements on the left, on the other hand, work toward the protection of those attacked by the alt-right and oppressed by an unjust system.

The boycott of Manny’s is supported by the Mission’s social justice community because both gentrification and Zionism require and result in the forced displacement of long-standing communities from their homes for the sake of profit and indigenous peoples from their land for the sake of power.

Our community institutions should create venues for genuine discussions about how to confront oppression. Manny’s does not accomplish the goal of “civic discourse” on social justice because it contributes to racist gentrification and supports the Israeli occupation of Palestine. The boycott of Manny’s is the community standing up to Yekutiel’s opportunistic attempt to exploit social justice for profit while perpetuating and supporting the destructive politics of gentrification and Zionism.