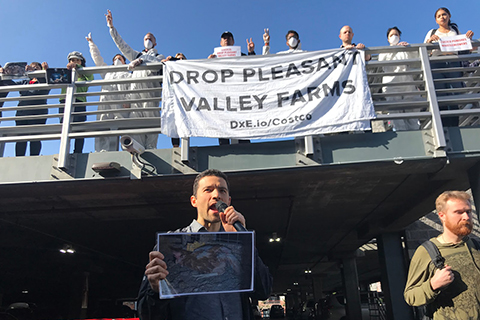 On January 31, dozens of activists with the animal rights network Direct Action Everywhere (DxE) put up “Caution” and “Danger” tape across the San Francisco Costco meat department in a protest of alleged animal cruelty and biohazard risk inside Costco farms. The activists were also protesting the criminal prosecution of two activists who exposed animal cruelty at a Costco egg supplier and who now have been fined a massive restitution penalty.

A 2016 DxE investigation exposed widespread cannibalism and horrific conditions at Pleasant Valley Farms in Ripon, California. The two Bay Area residents who investigated the farm, Jason Oliver and Paul Picklesimer, were initially charged with felony commercial burglary and subsequently pleaded no-contest to a reduced charge of trespass. The defendants were then ordered to pay restitution of $331,991 to compensate the farm owner’s claim that he was forced to depopulate (slaughter) all chickens in the barn, despite the fact that all of the chickens the farmer killed were in the wrong barn, a barn the activists never entered. The DxE activists assert that the depopulation occurred to cover-up cruelty at the farm, and they cite documents showing rates of animal mortality far above industry standards.