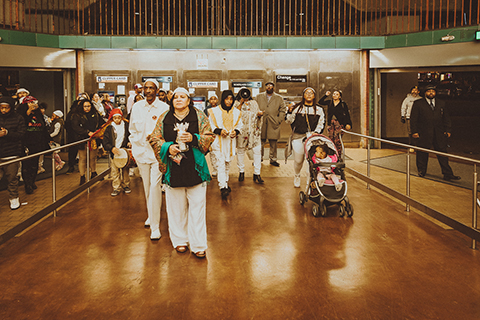 BART police officer Joseph Mateu approached the corner of 7th and Chester Streets in Oakland on January 3, 2018, and saw two men in an altercation. Mateu decided Tindle was the aggressor and shot him three times in the back, killing him. On October 19, District Attorney Nancy O'Malley released a report declaring that she would not bring any charges against Mateu.

One year after the slaying, on January 3, 2019, Sahleem's family and activists with the Anti Police-Terror Project gathered at the West Oakland BART station to protest and hold vigil for justice, accountability, and remembrance. After two hours in front of the station, expressing frustration with the lack of a criminal investigation into Sahleem's killing, protesters stormed inside the station, then marched out to the corner where he was shot, and back. They returned to a closed and gated up BART station, with at least nine BART officers inside. Protesters chanted, "Who shut you down? We shut you down!" Despite the lack of criminal charges, the family is still pursuing a civil case against BART and Mateu.