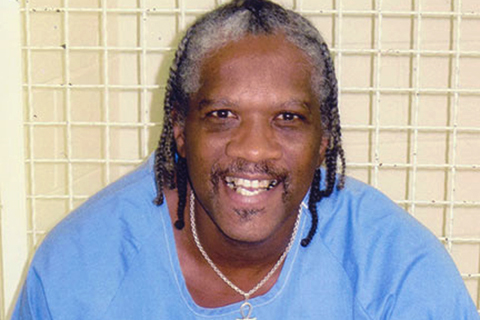 Kevin Cooper is an African-American man who was wrongly convicted and sentenced to death in 1985 for the gruesome murders of a white family in Chino Hills, California. He has never received a fair hearing on his claims of innocence and has remained on death row at San Quentin for decades. Commenting on post-conviction legal proceedings in 2009, five dissenting federal appellate judges wrote: "There is no way to say this politely. The district court failed to provide Cooper a fair hearing.... The district court impeded and obstructed Cooper’s attorneys at every turn." On December 24, 2018, before he left office, Governor Jerry Brown ordered new DNA tests for Kevin Cooper.

Kevin Cooper responds to the order for new testing: I write this missive to you so that you will hear from me about how I feel and what I think going forward in this fight for my life. Like all of you, I am happy that we have finally “won” something from some entity in this state. But after learning what exactly outgoing Gov. Brown wrote in that executive order I am not as excited as I was at first, or should be.

Gov. Brown waited until there were about 10 working days left in his administration before he granted us this “very limited DNA testing order and special master to oversee the testing” while denying us what is possibly the most important thing that we requested when we asked for a special master and DNA testing, which is an “innocence investigation.”

Will Kevin Cooper finally get a fair hearing? | SaveKevinCooper.org

An interview with Kevin Cooper's lawyer |

The Framing of Kevin Cooper, on San Quentin’s Death Row