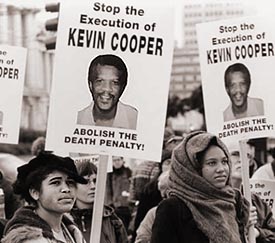 2/21: Press Conference to announce a call for a Moratorium on the Death Penalty in California.
2/9/2004: Saying "no person should be executed if there is doubt about his or her guilt and an easily available test will determine guilt or innocence," the 9th Circuit Court of Appeals granted a stay that blocked the execution of Kevin Cooper. Attorney General Bill Lockyer immediately petitioned the US Supreme Court to overturn the stay but the court declined to overrule it.

On February 9th, hundreds gathered at San Quentin to protest Kevin's execution (Photos: 1   2   Video) and there was much joy as the Supreme Court's refusal to hear Lockyer's petition was announced. On February 3rd, there was a press conference in San Francisco ( Video: 1  2  3  4  5  Photos ), an anti-death penalty rally in Sacramento ( Video ), a panel discussion featuring Angela Davis in Santa Cruz ( Photos ) and a civil disobedience action at San Quentin ( Photos ). Critical Resistance Radio recently interviewed Kevin's lawyer ( Audio) and on February 2nd, Flashpoints interviewed Kevin on the air ( Audio ). There have also been several protests against Kevin's execution in Southern California (Photos: 1  2 ).
Kevin Cooper is an inmate on death row at San Quentin State Prison. In 1985 he was convicted of the murder of the Ryen family and a houseguest in San Bernadino county. The state's case against Kevin Cooper is full of holes, and he has always maintained his innocence. There are also issues of racism, poverty, and police misconduct in this case.
Here are just a few of the facts:
* Clumps of long, blonde hair were found in the hands of one of the victims. Photographs of this hair were never shown to the jury.
* At least three weapons were used in the brutal murders, indicating multiple perpetrators. Prosecutors were unable to account for this, claiming that Kevin Cooper acted alone.
What you can do:
-Call Gov. Schwarzenegger at 916-445-2841 or e-mail governor@governor.ca.gov
-Take part in an upcoming protest
Upcoming events | Kevin’s Latest Statement | http://www.savekevincooper.org
Coverage by IMC Santa Cruz | Save Kevin Cooper Contingent at SF MLK March
Audio From Flashpoints ( 1/29 Press Conference   2/2 Interview with Kevin )
Democracy Now! Audio | Statement By Mumia | www.nodeathpenalty.org
Coverage by LA Indymedia | Coverage by Portland Indymedia