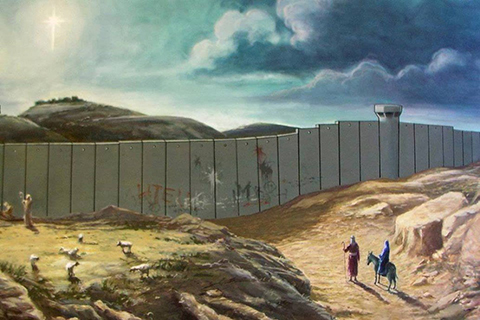 On December 20, Israeli settlers razed Palestinian-owned lands in the Battir village in the southern occupied West Bank district of Bethlehem, apparently to create a settlement road. Palestinian villagers from Battir attempted to prevent settlers from razing their lands. On Christmas eve, under the protection of Israeli forces, the settlers stormed the Khemar area, to the northeast of Battir, and erected a “caravan” as a prelude to a new illegal settlement outpost. The Israeli military has prevented Palestinian citizens and landowners from reaching the area.

Meanwhile, Christians in Gaza, who form a minority there, annually apply for “holiday permits” to the West Bank. However, most of the time Israeli authorities file permits for the parents and not the children, or, in other cases, for the mother and not the father. Most Christian families are divided due to this type of restriction and are unable to travel outside of Gaza and celebrate Christmas in Bethlehem or elsewhere.

Despite the torments of the occupation, Christmas celebrations rang out in Bethlehem, by Palestinians of the occupied West Bank and international delegations. Bethlehem’s mayor Anton Salman sounded a defiant note, declaring, “the message of Palestinians, on Christmas, is that we are staying in the Holy Land, and will maintain it, and resist the occupation until our national goals are achieved, specifically independence and establishing a Palestinian state with Jerusalem as its capital.”

Thousands Gather in Bethlehem for Christmas |

Tourism in Palestine “Booming” during Christmas