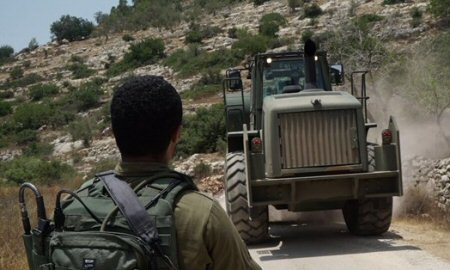 Breijieh added that opening the settlement road comes as an attempt by Israeli settlers to build a new settlement outpost on seize Palestinian lands.

Palestinian villages from Battir attempted to prevent settlers from razing their lands.

Breijieh further pointed out. according to Ma’an, that the northwestern area of Battir, locally known as al-Khamar, was recently confiscated by Israel despite the fact that the owners have provided legal documents proving their ownership of the lands.

Battir was inscribed on the UNESCO list as “Palestine: Land of Olives and Vines”, in 2014, and comprises a series of farmed valleys, with characteristic stone terraces, some of which are irrigated for market garden production, while others are dry and planted with grapevines and olive trees. Battir is on the UNESCO world heritage list, due to its terrace farming and irrigation channels.

Also on Thursday, under the armed protection of Israeli forces, Israeli settlers began to raze agricultural lands in the village of Um Saffa, to the northwest of Ramallah, in the occupied West Bank, according to local sources.

Marwan Sabah, head of the Um Saffa village council, told WAFA that Israeli settlers accompanied with bulldozers started to raze a 500-dunum land in the village under the protection of Israeli forces, aiming to expand the nearby illegal Jewish settlement of Ateret.

Sabah said the village has been a frequent target of attacks by extremist Jewish settlers for years.

In related news, Israeli forces chased a Palestinian shepherd, while he was grazing his sheep in an open field, in the northern Jordan Valley region, in the occupied West Bank, Thursday, said local sources.

Aref Daraghmeh, a local rights activist, said that soldiers chased after the shepherd while grazing his sheep in the area before briefly detaining him.

The Israeli army has been restricting the access of shepherds, to pastures, in an apparent attempt to force Palestinian citizens out of the area, for the benefit of Israeli settlement activities.

Since the occupation of the West Bank, including East Jerusalem, in 1967, between 500,000 and 600,000 Jewish settlers have moved into Israeli settlements in occupied Palestinian territory, in violation of international law.