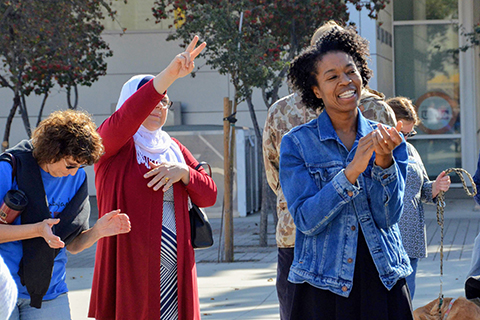 A gathering of Veterans for Peace and allies began with solemn tone at 10:30am on November 11th in the plaza at San José City Hall. After ritual bell ringing and a moment of silence for those lost in war, the vigil took a joyous turn as area activists shared messages of peace and joined together in music and dance.

Khalilah Ramirez is the creator of the Dance of Peace; one her goals in developing the performance was to make creating peace a living activity. She and Sharat Lin performed the dance, a form of expression that connects the mind, body and the earth. The Raging Grannies of San José led communal singing. A guitarrón mexicano and horn combo added to the entertainment portion of the event.

This year marks the 100th anniversary of the end of WWI. Congress voted to change the name of Armistice Day to Veterans Day in June 1954. President Dwight D. Eisenhower issued a proclamation acknowledging that the United States had been engaged in two wars since Armistice Day was first observed and, with that, the annual observance became Veterans Day. Veterans for Peace wants the country to return to the original sentiment, and once again celebrate a day calling for an end to all war.