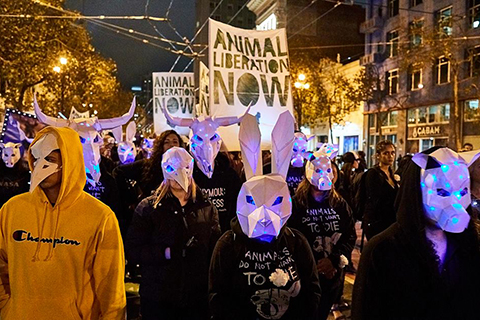 Over 200 activists with the grassroots animal rights network Direct Action Everywhere (DxE), many wearing glowing paper animal masks, stopped traffic for more than 15 minutes at the busy intersection of Geary and Powell Streets in downtown San Francisco on October 27, chanting their message to raise awareness of the 150 million animals killed and used for food each year in San Francisco alone. DxE says the action was meant to bring the animals’ voices back to life, amplifying their cries for all of San Francisco to hear.

The activists were also marching to honor the brief lives of animals such as Angel, a dying calf that DxE activists tried to rescue from a California farm on October 18, but who was taken away by police as she was being carried to safety. They spoke and displayed signage in remembrance of 9 hens taken from activists’ arms and later killed by authorities during a September 29 demonstration at a Petaluma chicken farm which resulted in multiple felony charges for 58 activists.